Some would say that all you really need for a tailgate is a truck, a radio, and a well-stocked cooler. But why stop there?

Tailgating is a tradition woven as deep in the fabric of our nation as Thanksgiving dinner. There’s no better way to show your love for the team than throwing the loudest, rowdiest, best-est tailgating party in the school’s history. 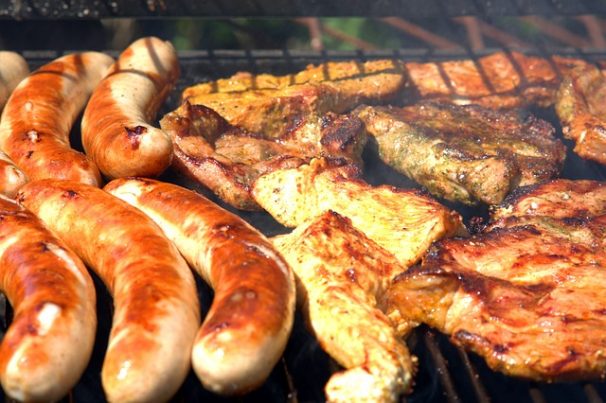 You bring the energy. We’ll provide the essentials.

The basic tailgating checklist looks something like this – we’ll expand on it with recipes, tips and ideas below.

Tailgating grub shouldn’t be complicated. Simpler is better. After all, most tailgaters aren’t seated at tables holding forks and knives – they’re milling around with a beverage in one hand and a snack in the other.

That’s one of the reasons why hosts usually serve up BBQ staples like burgers, hot dogs, and sausage on a bun. Burritos and tacos (and their kid-friendly cousin, Fritos in a Bag) have also gained ground in the tailgating world.

Not a carnivore? There’s plenty of cheesy, buttery goodness you can grill up alongside burgers. Check out Bobby Flay’s best-ever corn on the cob, Todd + Diane’s chargrilled cauliflower steaks, or these gooey cheese-stuffed grilled peppers.

But BBQ is just the main course, and a good tailgate should have food enough to last guests from pregame to post. The Today Show helpfully defined the four tailgating food groups as dips, grillers, stews and sweets – your party should have plenty of each.

Bring on the Beverages and Keep ‘em Cold

Beer, coolers, cocktails, soda…your tailgate, your choice. The point is, you’ll want to keep those bevvies cold for as long as possible.

The pinnacle of tailgate drink storage is the beverage center: a compact refrigerator made just for cans and bottles. Since you can see what’s inside through the glass door, there’s no holding it open and letting the cold out while searching for a certain drink.

Still waiting to find a beverage center in your stocking? In the meantime, an ordinary plastic cooler can do the job well enough. For best results, it helps to pre-chill the cooler by filling it with cold water and a bag of ice at least 12 hours before game time. When it comes time to pack the cooler, cover the bottom with a layer of ice and try not to leave big gaps between items.

As for the age-old question of whether to drain the melted ice mid-game, science has the answer: the cooler’s contents will stay colder for longer with that meltwater in.

Set Up a Tailgate TV

No tailgate party is complete without a way to tune in to the game. The good news is, there are more ways to do this than ever, and it’s a lot easier than it used to be.

Setting up a tailgate TV is simple. TVs are comparatively lightweight nowadays, and many hardware stores rent out generators for power hook-up. If the TV doesn’t sit steadily in your vehicle, you can put together a simple tailgate TV stand with a few tools and some plywood.

When it comes to broadcasting the game, many fans have switched from tailgate antennas and satellite dishes to streaming services. There are plenty of devices out there designed to help you stream video to a TV from computers, tablets or mobile phones. Choosing standard definition over high def will cut down your data costs – but let’s face it – the best tailgating party is going to be one that displays every throw, catch and fumble in full HD. Splurge if you can.

We like to party. Here are some of the other bright ideas we’ve had!

This website uses cookies to improve your experience while you navigate through the website. Out of these, the cookies that are categorized as necessary are stored on your browser as they are essential for the working of basic functionalities of the website. We also use third-party cookies that help us analyze and understand how you use this website. These cookies will be stored in your browser only with your consent. You also have the option to opt-out of these cookies. But opting out of some of these cookies may affect your browsing experience.
Necessary Always Enabled
Necessary cookies are absolutely essential for the website to function properly. This category only includes cookies that ensures basic functionalities and security features of the website. These cookies do not store any personal information.
Non-necessary
Any cookies that may not be particularly necessary for the website to function and is used specifically to collect user personal data via analytics, ads, other embedded contents are termed as non-necessary cookies. It is mandatory to procure user consent prior to running these cookies on your website.
SAVE & ACCEPT