Skip to content
Home Blog Air conditioner or a dehumidifier to help me sleep?

Air conditioner or a dehumidifier to help me sleep?

How does humidity impact temperature?

On a hot day, you might hear the old adage, “At least it’s a dry heat.” But what does this mean? Temperature tells us how hot it is, right? If the thermometer reads 25◦C, it should feel hot, shouldn’t it?

Not quite—the humidity actually plays a large role in the way a person feels and how comfortable they are on a hot day. But to what extent does the humidity control the way we feel?

This table from Environment Canada shows the humidex value for a given temperature and relative humidity.

The first thing to understand is what exactly we’re looking at. Temperature and humidity are similar and directly relate to each other, but they are inherently different. Temperature is simple: it’s the measure of a form of energy called heat. Humidity is a bit trickier to explain; as temperature increases, air—which is a mixture of gases—is able to hold more and more water as it evaporates into a gas. The amount of water in air depends on how much water there is in the environment, the air pressure of the system, and the temperature of the air.

Getting into air pressure complicates things, so we’ll just focus on the effect of temperature. The simplest way to understand it is that as air temperature increases, the smallest particles—or molecules—move around faster and need more space.

If you think about it, it’s easy to remember that warm air fills more space, and is less dense—this is why hot air balloons float!

As the air becomes less dense, there is more space for water molecules to fit into. As temperature goes up, the potential amount of space for water in the air goes up. The maximum amount of water in air, therefore, is limited by the temperature. This limit follows a curve that looks like this: 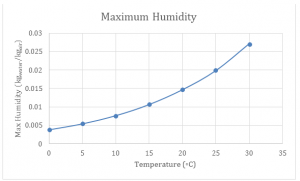 But if there’s a limit to how much water can be in the air, what happens when it goes past 100% relative humidity? Well since there’s no more space in the air for it to fit into, that water needs to turn back into a liquid. This is known as the dew point. The dew point temperature is the temperature at which dew—a.k.a. condensation—forms.

In other words, if you consider all conditions to be equal and you gradually decreased the temperature, the relative humidity would increase until it reaches 100%. You’ve now reached the dew point temperature.

In the summer, when you listen to or look up a weather forecast, the temperature will usually be followed by a higher temperature that tells what it might feel like. This is because when the relative humidity is high, it feels hotter.

To understand why, we need to learn a little about biology. Humans have unique physiology. Some unique qualities are obvious, like large brains, and walking and running on two limbs. One key differentiator, though, is a built in cooling mechanism: sweating. When we sweat, heat is carried away with the evaporating water.

The rate of cooling directly relates to the rate of evaporation. When you think this way, and remember that there is a limit to how much water can be in the air, the result becomes obvious—evaporation (and cooling) doesn’t happen so quickly when the air is already saturated with water.

And this is—partly—how we figure out what the “feels like” or “apparent” temperature is—by considering how well a human body will be able to cool itself down through evaporation.

Meteorologists make an estimate on how hot the weather feels by calculating something called the humidex, which was derived by work published by R.G. Steadman in 19792. The humidex is calculated from the air temperature and the dew point temperature with the following equation:

The humidex value that this equation spits out then tells us how comfortable—or uncomfortable—it is. Humidex is often represented as what the temperature actually feels like to someone. For example, a muggy Southern Ontario day with a RH of 85% and temperature of 25◦C, is going to feel more like 34◦C but if the humidity were only at 50%, it would feel like 28◦C.

­­On the hottest days, dropping the humidity will have an even greater effect on how it feels.

During the summer, it’s a combination of the heat and the humidity that makes people feel uncomfortable. The most intuitive way to beat the heat is to cool down the air around you by turning on an air conditioner. But never forget about humidity. Sometimes it might be more efficient to simply reduce the humidity and, as you now know, the relative humidity has a massive impact on how you feel in the heat.

1Lawrence MG. The relationship between relative humidity and the dewpoint temperature in moist air: A simple conversion and applications. Bulletin of the American Meteorological Society. 2005 Feb;86(2):225-33.

2Steadman RG. The assessment of sultriness. Part I: A temperature-humidity index based on human physiology and clothing science. Journal of Applied Meteorology. 1979 Jul;18(7):861-73.