Despite the numerous benefits of home-cooked meals, including eating healthier and saving money, learning to cook can be a daunting task and is sure to be full of mistakes when you first get started. To help you on this journey, we have compiled 10 of the biggest novice cooking mistakes so you know what to watch for before something goes wrong. 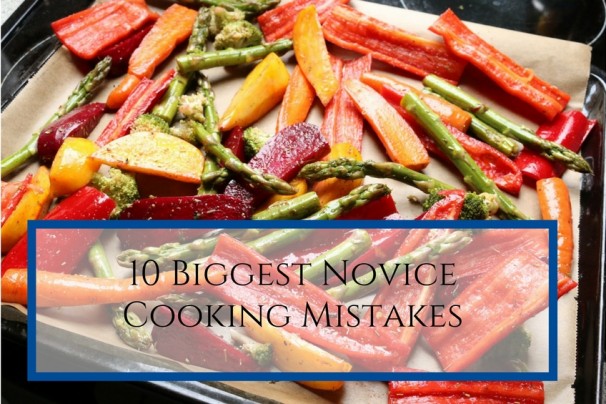 Failing To Read the Whole Recipe

When trying a recipe for the first time, make sure to read the whole thing before you begin. In an effort to save time in the kitchen, many people start cooking before they read everything. The end of the recipe may include cooking tips, such as information regarding variations or details about things to avoid.

Working In a Messy Space

Not Seasoning As They Cook

These next two novice cooking mistakes go hand in hand. Failing to season as you cook results in bland food. While many claim they correct this by adding salt and pepper just before they eat, this also means adding too much salt in an effort to make food taste better. Instead, add spices gradually throughout the cooking process to infuse food with flavour so the need for salt at the end is minimal.

Not Tasting As They Go

Tasting food as it cooks is essential, particularly when you season as you go. Too many cooks simply add their spices (or none at all) and do not taste the food before plating up. This can result in bland food, or even overly spicy or salty food. Make a point of tasting your food periodically—when it is safe to do so, of course—and decide if you need more flavour or if you have things just right!

Overcrowding the Pots and Pans

When cooking, the desire to fill the pot or pan as much as possible is quite understandable if you are trying to minimize dishes, save cooking time, et cetera. However, adding too much food in a single pan or on a single baking sheet can result in serious errors while cooking. Many cooks accidently burn their food this way, while others actually undercook it. Ensure there is still some space and ingredients are not all stacked on top of one another.

Opening the Oven Too Often

When baking a cake or roasting a chicken, avoid the temptation to keep opening the oven. Many novice cooks want to open the oven to check on their food and ensure things are going well, but doing so too often can actually cause mistakes. You may end up with undercooked food thanks to heat escape! Try not to open the oven at all, unless the recipe says you need to baste your chicken (or similar) once or twice, or turn over your fries.

Instead of removing bacteria, rinsing chicken, turkey, or duck just causes the bacteria to spread onto other kitchen surfaces. Many novice cooks do not remember to clean their preparation area immediately afterwards. This gives bacteria the chance to grow and cause sickness later. Thus, avoid rinsing your chicken and let the heat work its magic!

If a cook does not chop their ingredients as evenly as possible, they may find that certain pieces burn before others have the chance to cook all the way through. While you do not need to be exact in all of your chopping, keeping things similar will help with even cooking.

Cheap and dull knives make chopping ingredients much harder than necessary! Look for high-quality knife sets and be sure to sharpen them regularly. Sharp knives require less effort when chopping food, and so long as you are careful, actually result in fewer injuries because you can use less force.

Using the Wrong Type of Oil

What kind of oil do you think you should use for cooking? The answer may surprise you. While many novice cooks will answer “olive oil,” this is often incorrect. Many scenarios, such as using oil for frying, require oils with a higher smoke point. If the oil smokes, it actually releases harmful chemicals. Try something like vegetable oil and save the extra virgin olive oil for salad dressing instead.