5 Accepted Facts About Cooking That Are Untrue

There are many useful facts that can help improve your cooking. For example, cutting a steak against the grain will make the meat more tender. Searing meat will help boost the flavour, though it does not lock in the juices. Storing a sliced tomato upside down will help keep it fresh for longer, and putting fruit in a paper bag will help with the ripening process. 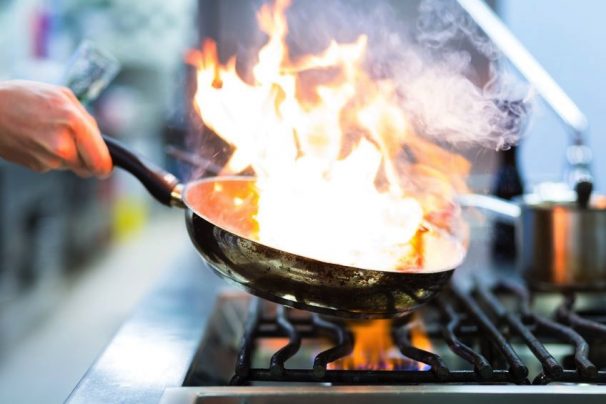 Despite the number of cooking facts out there, there are actually quite a few that are, shockingly, not true. Here are 5 of the most popular accepted facts about cooking that are untrue:

Many people use different wines in making a sauce, rum in baked goods, et cetera. This adds more flavour and different layers to cooking.

Most people do not think twice about it, since they believe the cooking process will make the alcohol content evaporate, only leaving the flavour infused in their dish.

However, science indicates this may not actually be true. Depending on the specific cooking technique, including the length of cooking and the temperature, you may have up to 85% of the alcohol still in your food!

Seeds in Peppers Contain the Most Heat

Those who are spice-conscious but still want to include peppers in their cooking often remove the inner seeds in an effort to minimize the heat in their dish. However, this is not effective, since the seeds in peppers actually do not contain the most heat.

Adding Oil to Water Will Prevent Pasta from Sticking

No one wants their pasta to stick together—this just results in clumpy bits and broken noodles. It can also mean chewy pasta.

To combat this, many people put a little bit of oil, most often vegetable or olive oil, to their pots of boiling water in an effort to prevent the pasta noodles from sticking. However, this does nothing for you.

Not only does oil just float to the top, it can also affect the amount of sauce that can stick to your noodles, which some believe makes it a complete waste. The only ways to really ensure your noodles do not stick is to stir the water when it is at a full boil.

Does anyone really want to wait that long for their water to boil? No one we have heard of, at least.

Many people look for tips to make the water boil faster, including salting their water. However, salt has a higher boiling point than water, which means it can actually slow down the boiling process slightly. The real reason to add salt to your pasta water is for seasoning.

The only way to ensure your water boils as fast as possible is to turn up the heat and keep the pot of water covered.

Microwaves Will Kill All Bacteria on Food

Microwaves are perhaps the most convenient appliance an individual can own when it comes to cooking. Many people often find themselves relying almost entirely on their microwave, trusting that its ability will kill all bacteria present on their food. However, this is not true.

Microwaves heat from the outside in, which is part of the reason you may end up with cold spots. These, as you may or may not be aware, are breeding grounds for bacteria. In fact, some studies have linked this to cases of food poisoning.

Thus, while microwaves are good for reheating fully-cooked meals, they are still not the safest way to cook your meals. If you’re worried about bacteria, you would be better off using other appliances, such as your traditional oven.

Category: Blog
Tags: cooking, cooking facts, facts about cooking, facts about cooking that are untrue
Popular Posts
We use cookies to ensure that we give you the best experience on our website. If you continue to use this site we will assume that you are happy with it. View Policy
Allow Cookies Reject
Manage consent

This website uses cookies to improve your experience while you navigate through the website. Out of these, the cookies that are categorized as necessary are stored on your browser as they are essential for the working of basic functionalities of the website. We also use third-party cookies that help us analyze and understand how you use this website. These cookies will be stored in your browser only with your consent. You also have the option to opt-out of these cookies. But opting out of some of these cookies may affect your browsing experience.
Necessary Always Enabled
Necessary cookies are absolutely essential for the website to function properly. These cookies ensure basic functionalities and security features of the website, anonymously.
Functional
Functional cookies help to perform certain functionalities like sharing the content of the website on social media platforms, collect feedbacks, and other third-party features.
Performance
Performance cookies are used to understand and analyze the key performance indexes of the website which helps in delivering a better user experience for the visitors.
Analytics
Analytical cookies are used to understand how visitors interact with the website. These cookies help provide information on metrics the number of visitors, bounce rate, traffic source, etc.
Advertisement
Advertisement cookies are used to provide visitors with relevant ads and marketing campaigns. These cookies track visitors across websites and collect information to provide customized ads.
Others
Other uncategorized cookies are those that are being analyzed and have not been classified into a category as yet.
SAVE & ACCEPT